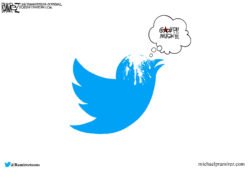 Twitter CEO Elon Musk reportedly plans to lay off half of Twitter’s staff, around 3,700 people, in a cost-cutting measure that will be announced Friday, Bloomberg reported Wednesday night, citing anonymous sources familiar with the matter.  In addition to announcing the layoffs Friday, Musk intends to end the company’s flexible …