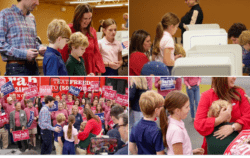 Republican Arkansas gubernatorial candidate Sarah Huckabee Sanders won her race against Democratic nominee Chris Jones, according to multiple election forecasters. The former White House press secretary under former President Donald Trump had won 71.6%, while Jones won 26.9% with 4% reporting, according to the AP. Sanders is the first female governor of …