President Trump accepted the award at Mar-a-Lago. Jexit acknowledged that President Trump has done more than any other U.S. President for the State of Israel and for the Jewish people. During his presidency, Trump moved the U.S. Embassy to Jerusalem, recognized Israeli sovereignty of the Golan Heights and brokered the Abraham Accords.

“I have a great love for the Jewish people, and for the state of Israel, always have and always will,” President Trump said during his acceptance speech.

“When I was president, the world knew I would stand by Israel,” Trump added.

President Trump accepted the award in front of 120 attendees. Jexit members say they recognize the unquestioned relationship between the United States and Israel and together the two nations are stronger.

A controversy on Twitter causes the White House to retract a statement.

On Wednesday, the White House tweeted that in 2023 Social Security checks will see their most significant increase in 10 years under President Joe Biden’s leadership.

However, the platform Twitter, under the leadership of Elon Musk, allowed users to add details to the statement. Representative Thomas Massie (R- Ky.) was one of the good Samaritans who helped clarify that the Social Security check increases are being adjusted for inflation.

Therefore, the 8.7% increase in benefits is meant to hedge against the 8.2% year-on-year inflation in September. Social Security checks have not seen a cost-of-living adjustment of this magnitude since 1981.

Humiliated, the White House took down the post and entrusted capable White House Press Secretary Karine Jean-Pierre to explain why.

The actions of the Federal Reserve also seem to disagree with the White House’s assessment of the economy.

On Wednesday, Jean-Pierre announced the Central Bank is hiking interest rates another 75 basis points which will set mortgage interest rates at 7%. This is up from 3% in January. Such moves are usually taken to curb rampant inflation, making mortgages harder to obtain in order to stabilize prices.

Despite the Fed’s actions, the Biden Administration continues to deny that the United States is currently in a recession. Still, most Americans are in disbelief, as 75% of the population believes that economic downturn already looms over the country.

Biden says he is sick and tired of hearing about trickledown economics. The president bragged that he’s finally created an economy that works for working families.

“An economy that works for everybody,” Biden said. “Through bold actions like these, we’re taking our vision to reality. This is what it looks like when America comes together to get something done.”

The White House has been keen to seize its perceived accomplishments, boasting that a 4th of July cookout was 16 cents cheaper in 2021 than in 2020. However, the administration neglected to give a similar update this year amid record-high gas prices.

Representative Kelly Armstrong (R-N.D.) balked at Biden’s Social Security triumph, joking that the Surgeon General would explain that the high cost of eggs is good for Americans’ health.

According to the latest Emerson poll Wednesday, Democrat candidate Cheri Beasley trails Budd (R-N.C) by five points, with only 45% support.

Favorability ratings are playing a big role in the race. Budd has a net positive favorability of 13-points while Beasley is underwater by two.

This comes after earlier polling showed the potential for a toss-up race.

Netanyahu Expected to Start Coalition Talks with Ben-Gvir, Others, as Election Count Wraps 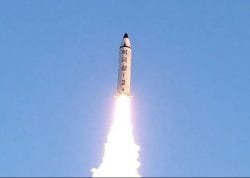 North Korea launched a volley of missiles, the most in one day, on Wednesday before capping off the record spree Thursday with an apparently failed intercontinental ballistic missile launch, according to multiple reports. The Thursday firing of an ICBM came in conjunction with up to five short-range missiles, making a …

The war on free speech rages on as the Treasury Department seeks to investigate Elon Musk’s acquisition of Twitter. Democrats across the country are blaming the Paul Pelosi attack on “right-wing social media sites and vitriolic rhetoric by Pelosi’s political opponents.”

One of those critics is Rita Katz, the founder of the website “Search for International Terrorist Entities.” She claims websites that promote free speech and are out of the mainstream media’s control will only lead to the radicalization of those sites’ populations.

The idea that allowing people to speak their mind will only cause violence and extremism in a country founded on free speech, is one Conservatives have been fighting for years. It is with companies like Twitter, recently acquired by Elon Musk, that have been silencing Americans with minority opinions for years, even going as far as to de-platform a sitting president.

Fortunately, the era of extreme censorship on Twitter is coming to an end. Musk has removed previous content moderating policies which kept many Americans from freely expressing their discontent with the mainstream media.

Musk tweeted on Wednesday that his goal is to make Twitter the most accurate source of information on earth without regard to political affiliation.

This sentiment angered Democrats who prefer to see anyone with an ideation other than their own silenced.

“When Trump, for instance, was pushed away from Twitter, from Facebook and from other platforms, media organizations stopped even using his quotes. He created his own platform, Truth Social. There he can say whatever he wants,” Katz said.

Musk’s crusade for freedom and truth appears to have put a target on his back as Biden’s Treasury Department is now seeking to put Musk’s acquisition of Twitter under a microscope. The Treasury is looking into the legality of them opening up an investigation due to the Tesla CEO’s ties to foreign investors and governments. However, the committee, which typically investigates such potential national security risks, are meant to probe foreign nationals. Elon Musk is a U.S. citizen.

This comes while concerns about the Biden family and their known ties to Russia and China are swept under the rug.